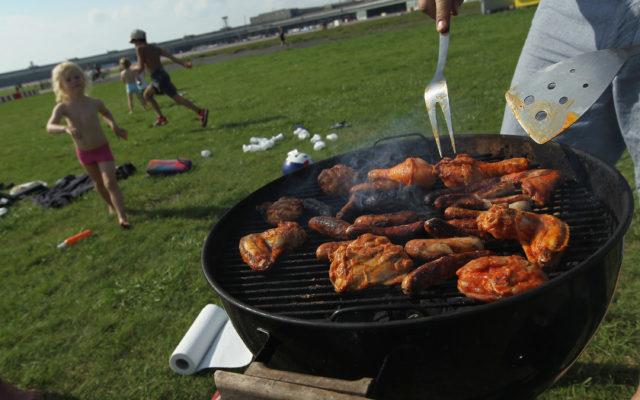 BERLIN, GERMANY - SEPTEMBER 11: A family relax and prepare barbecued chicken and sausages at former Tempelhof airport on September 11, 2011 in Berlin, Germany. Tempelhof, located in central Berlin, was an airport built in the 1930s and is most known for being the main airport used by the Allies in the Berlin Airlift that kept the city and its residents supplied during a blockade by Soviet forces in 1948. The airport closed in 2008 and the grounds were reopened in 2010 as a public park called Tempelhofer Freiheit. City officials are currently considering various proposals for the park's future design that include adding apartment buildings on its outskirts and adding a new subway stop for better access. (Photo by Sean Gallup/Getty Images)

Budweiser Canada has forayed into the “insurance” business and the first of its new products will help you at the grill.

Ok, so the insurance is actually a way for Budweiser to give out money and merchandise to its consumers.

The “insurance product” will cover anything that could ruin a barbecue cookout-be it rain, or a lack of propane.

Budweiser fans can actually fill out a claim on the company’s BBQ insurance website for a chance to win a prize package worth up to $2,500!

Are you looking forward to barbecues this summer? What is your favorite thing to cook at a barbecue?