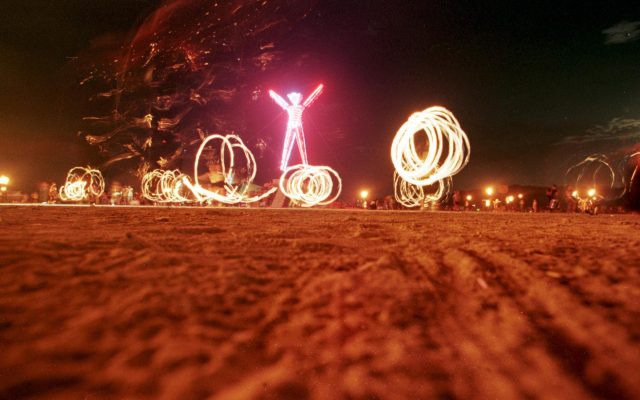 BLACK ROCK DESERT, UNITED STATES: Dancers at the "Burning Man" festival create patterns with fireworks in the Black Rock Desert of Nevada just prior to burning a five-story, neon-lit effigy of a man on the last night of the week-long festival 06 September. Some 15,000 people attended the 1998 "Burning Man" festival, which reportedly began 13 years ago in San Francisco, and which always culminates in the burning of a giant effigy of a man. The festival has grown into one of the nation's annual premiere countercultural events, with the size doubling virtually every year and drawing people from as far away as Japan, Europe and Australia. AFP PHOTO Mike NELSON/ (Photo credit should read MIKE NELSON/AFP via Getty Images)

Organizers for this year’s Burning Man Festival are still considering requiring festival-goers to be vaccinated before they come out to enjoy good music.

The festival was called off last year because of COVID, but now organizers want to bring people back while keeping people safe.

Earlier organizers said that vaccinations would be mandatory, but decided to push back on that train of thought.

Under normal circumstances, Burning Man would have about 80,000 people in attendance. Organizers hope to have a decision about vaccinations by the end of this week or the end of April.

Do you think vaccinations should be mandatory in order to get things back to normal?