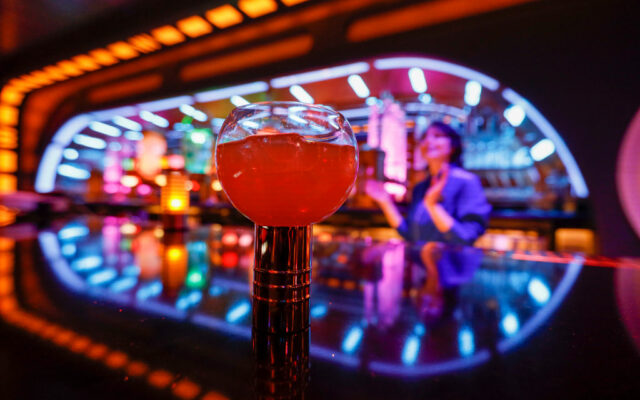 Orlando, Fla - March 01: A drink in the Sunlight Lounge aboard the Halcyon ship. The first passengers were experiencing the two-day Walt Disney World Star Wars Galactic Starcruiser, which is a live action role playing game that doubles as a high-end hotel in Orlando, Fla. The event is billed as Halcyons 275th anniversary voyage across the galaxy. at Walt Disney World Star Wars Galactic Starcruiser in Orlando, Fla on Tuesday, March 1, 2022. First Order lieutenant Harman Croy and his garrison of stormtroopers patrol the ship. Guests arrive at Batuu, a destination for a planet excursion. Players use a data pad to play the immersive game while they participate in activities such as light saber training. (Allen J. Schaben / Los Angeles Times via Getty Images)

Disney is now selling a Star Wars drink that will take you to a galaxy far, far away for $5,000.

The Kaiburr Crystal, a drink honoring the Star Wars universe, is served in a carrier complete with mechanical doors, and smoke.

If you got the credits to get yourself one of these drinks it’s only available on a Disney cruise ship.

If you had the money, would you try the drink?