FDA Waives $15,000 Fee For Distilleries That Made Hand Sanitizer 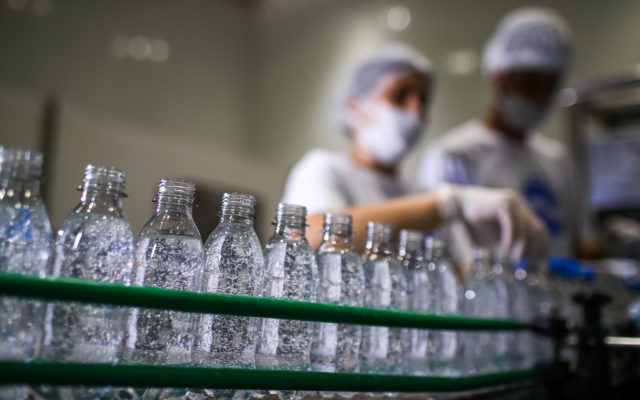 VINHEDO, BRAZIL - APRIL 06: Workers in the hand sanitizer bottling process in AGE do Brasil factory on April 6, 2020 in Vinhedo, Brazil. Ambev is producing hand sanitizers using ethanol extracted from its Barra do Pirai Brewery. Ambev is completing the hand sanitizer production with a partner company, AGE do Brasil, which provides the carbopol (to be mixed with the ethanol) and the work force for the process to be completed. In AGE's factory the final product is bottled and labeled; picked up by Ambev's trucks and taken to its distribution center. The hand sanitizers produced by Ambev have been donated to hospitals in Rio de Janeiro and Sao Paulo. Ambev was born in 1999 from the merger between the centenarians 'Cervejaria Brahma' and 'Companhia Antarctica'. Interbrew from Belgium and Ambev merged to create InBev. Belgium-Brazilian InBev acquired Anheuser-Busch from the United States creating the world biggest brewer. (Photo by Buda Mendes/Getty Images)

The FDA is walking back that surprise $15,000 fee for distilleries that made hand sanitizer during the pandemic.

Earlier this week, distilleries found out they would be charged a hefty user fee for making alcohol-based hand sanitizer, due to regulations requiring them to register as a drug maker.

But on Thursday, the agency announced that the charge was a ‘mistake’ and would be rescinded.

One senior HHS official said “Small businesses who stepped up to fight Covid-19 should be applauded by their government, not taxed for doing so.”

Why was the fee charged in the first place?  Have you been able to find hand sanitizer on store shelves lately?