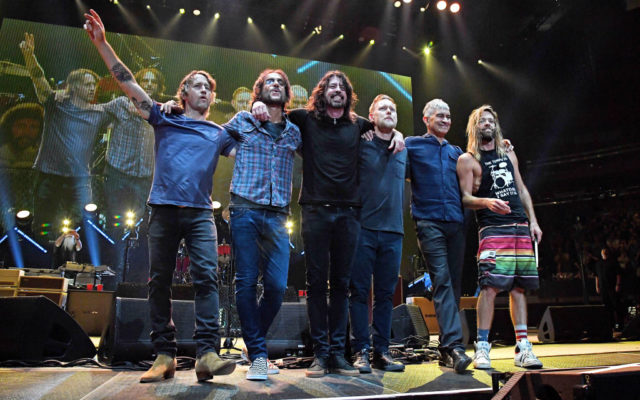 NEW YORK, NEW YORK - JUNE 20: (L-R) Chris Shiflett, Rami Jaffee, Dave Grohl, Nate Mendel, Pat Smear and Taylor Hawkins pose onstage as The Foo Fighters reopen Madison Square Garden on June 20, 2021 in New York City. The concert, with all attendees vaccinated, is the first in a New York arena to be held at full-capacity since March 2020 when the pandemic lead to the closure of live performance venues. (Photo by Kevin Mazur/Getty Images for FF)

The Foo Fighters will be given a special honor at this year’s MTV VMAs.

The band will be presented with the first-ever Global Icon Award at next month’s awards show.

The Foos will also perform at the show for the first time since 2007, and are nominated for three more awards for the video for “Shame Shame”.

This year’s VMAs will go down Sept. 12th from the Barclays Center in Brooklyn.

Why do they still have the VMA Awards when MTV doesn’t show music videos anymore?  What’s the best Foo Fighters video?