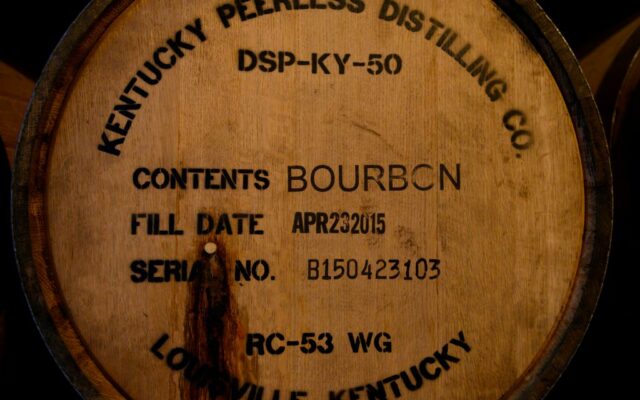 Bourbon seeps through a plugged whole, used to taste the ageing bourbon, at the Kentucky Peerless Distilling company in Louisville, Kentucky on April 11, 2019. - To be called Bourbon in the United States the whiskey mash contents require a minimum of 51 percent corn and stored in a new barrel lined with charred oak. After Canada, China, Mexico and the European Union slapped import duties from 10 to 25 percent on US whiskey and bourbon in 2018, exports dropped over 12 percent in the second quarter. (Photo by Andrew CABALLERO-REYNOLDS / AFP) (Photo credit should read ANDREW CABALLERO-REYNOLDS/AFP via Getty Images)

Cask finishing is all the rage in the whiskey world, as distilleries look for different ways to add flavor to their spirits.

A new rye whiskey from Kentucky Peerless is taking the trend to a new level with absinthe casks.

Absinthe is an anise-flavored spirit that is made using various botanicals.

It’s usually high proof, green in color, and has been hailed for its reputed hallucinogenic effects, which are much exaggerated.

Master distiller Caleb Kilburn explained, “I wanted something that would provide the perfect contrasting notes to allow both the rye and the absinthe to be appreciated. Bold, exciting, intriguing, and bursting at the seams with flavor, this crossover is the perfect example of what few artisans with big ambitions can accomplish when they come together.”

According to the distillery, the whiskey was “exposed” to two separate casks and the product has notes of candied licorice on the nose, followed by orange, oak, cinnamon, sweet grass and, yes, absinthe on the palate.

Have you ever had absinthe?  How did it affect you?