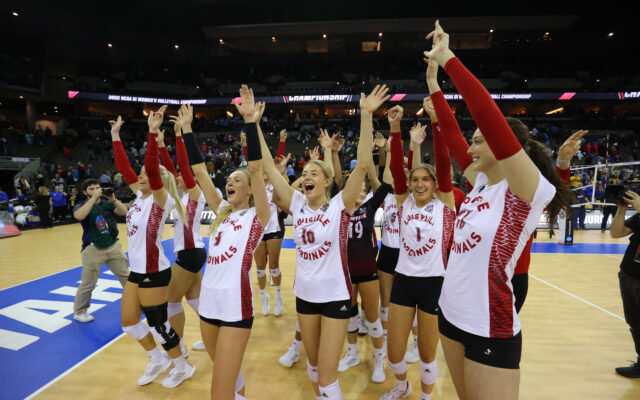 OMAHA, NE - DECEMBER 15: Claire Chaussee #9 of the Louisville Cardinals, Paige Morningstar #16 and Ceci Rush #1 celebrate with teammates after a 3-2 win over the Pitt Panthers during the Division I Womens Volleyball Semifinals held at CHI Health Center Omaha on December 15, 2022 in Omaha, Nebraska. (Photo by C. Morgan Engel/NCAA Photos via Getty Images)

After taking down Pitt in the National Semifinal last night, the Louisville Women’s Volleyball team heads to the National Championship for the first time in school history!

After a dominating season, the number 1 seeded U of L team looks to bring home the championship as the first ACC team to reach the Finals.

The final match against the top overall seed, Texas, happens this Saturday, December 17th, at 8PM ET on ESPN2.

Hosted by Louisville Athletics and the UofL Alumni Office, the event is free and open to the public with food and drinks available for purchase, including the limited edition “Wild Cardinal Sour.” Fans who arrive before 8 PM will receive a raffle ticket for gear giveaways.