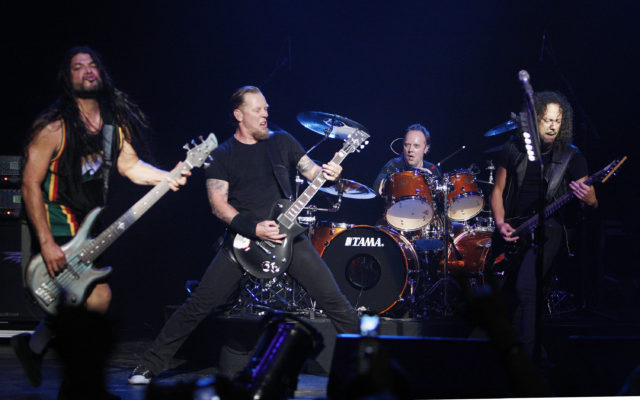 LOS ANGELES, CA - MAY 14: (L to R) Musicians Robert Trujillo, James Hetfield, Lars Ulrich and Kirk Hammett, of Metallica, perform at The Silverlake Conservatory of Music Benefit at the Wiltern Theater on May 14, 2008 in Los Angeles, California. (Photo by Kevin Winter/Getty Images)

Metallica are celebrating the 30th anniversary of the Black Album with the help of some big names in music!

Along with releasing a special reissue of the album, the band is also releasing a HUGE compilation called The Metallica Blacklist.

The compilation will feature over 53 different artists doing their own renditions of the band’s famous songs, including Louisville’s own My Morning Jacket, Miley Cyrus, Elton John, Royal Blood, Weezer, Ghost, and Corey Taylor!

The reissue of the Black Album and the Metallica Blacklist compilation will both be out on September 10!

What is your favorite song on the Black Album? What do you think of Miley Cyrus and Elton John’s version of “Nothing Else Matters?“