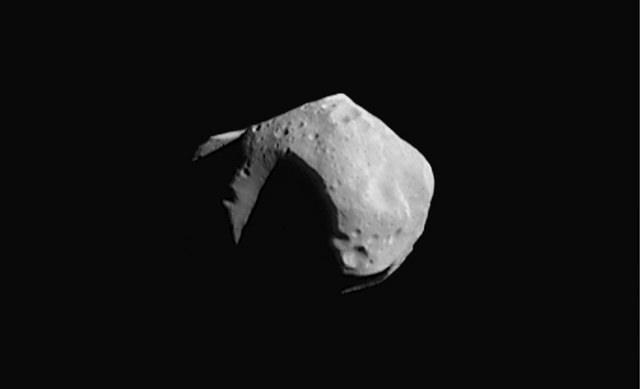 This image mosaic of asteroid 253 Mathilde releaseed by NASA 30 June is constructed from four images acquired by the NEAR spacecraft on 27 June. The images were taken from a distance of 1,500 miles (2,400 kilometers) with sunlight coming from the upper right. The surface exhibits many large craters, including the deeply shadowed one at the center, which is estimated to be more than 6 miles (10 kilometers) deep. The shadowed, wedge-shaped feature at the lower right is another large crater viewed obliquely. Mathilde's angular shape is believed to result from a violent history of impacts. AFP PHOTO/NASA (Photo by - / NASA / AFP) (Photo by -/NASA/AFP via Getty Images)

NASA is getting ready to study an asteroid that is literally a floating goldmine.

The asteroid, named ‘Psyche 16’, contains enough precious metals to make everyone on Earth a billionaire. Researchers estimate its worth at roughly $700 quintillion.

Now NASA is launching a probe to get a closer look at Psyche 16. It will launch sometime next year and arrive in the year 2026.

What should we do with this ‘goldmine’ asteroid? Could ‘deep space’ mining be the key to our resource and energy problems?