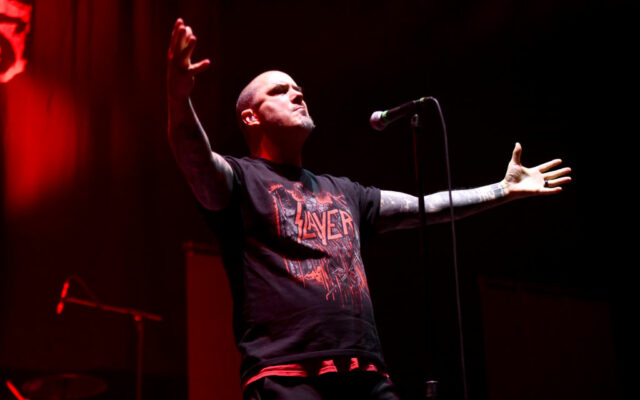 INGLEWOOD, CALIFORNIA - NOVEMBER 30: Singer Philip Anselmo, former singer of Pantera, performs onstage with his band The Illegals at The Forum on November 30, 2019 in Inglewood, California. (Photo by Scott Dudelson/Getty Images)

The reformed band, featuring surviving members Anselmo and Rex Brown, was scheduled to appear at Rock Am Ring and Rock Im Park, two simultaneous rock festivals, which will take place June 2-4 in Nürburgring and Nürnberg, respectively.

But after intensive discussions with artists, partners and fans, the festival promoters decided to remove the band from the bill.

Most of the backlash stemmed from the fact that Anselmo made a Nazi-style salute when he performed at the January 2016 “Dimebash” event at the Lucky Strike Live in Hollywood.

He also appeared to say “white power” as he made the gesture, but later claimed he was joking about drinking white wine backstage.

There was also criticism with regard to the fact that Rock Am Ring takes place in Nürnberg, where Hitler supporters held a series of mass Nazi party rallies between 1933 and 1938.

Anselmo previously talked about the incident saying, “I feel like it’s ridiculous. I made an off-color joke and ‘Boom!’ — it’s like I’m literally Hitler! I’m not. I take each individual one at a time, in the way that any logical individual will. I have love in my heart. If there’s any doubt about my political leanings, people should get it out of their heads. I was raised amongst a dazzling [cast of characters] from the theatre, from the mental hospital, from all walks of life — all colors, creeds and kinds. It’s absurd to me that anyone in this day and age would judge anyone by the color of their skin, their heritage or their religion. I’m a harmless guy. I’m a reactionary, not a troublemaker.”

What do you think about Anselmo’s remarks? Should they be removed from the festivals?