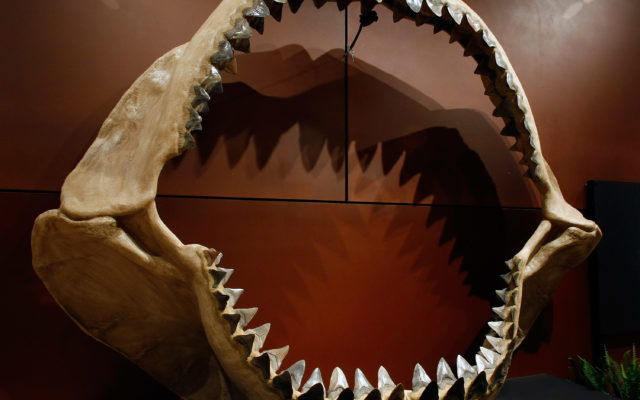 LAS VEGAS - SEPTEMBER 30: One of the world's largest set of shark jaws comprised of about 180 fossil teeth from the prehistoric species, Carcharocles megalodon, which grew to the size of a school bus, is displayed at the Venetian Resort Hotel Casino September 30, 2009 in Las Vegas, Nevada. Auctioneers Bonhams & Butterfields hope the fossil will fetch about USD 900,000-1.2 million when it is auctioned off on October 3 at the Venetian as part of their Natural History auction. The centerpiece of the lot of 50 fossils being auctioned is a 66-million-year-old Tyrannosaurus rex skeleton dubbed "Samson." The 40-foot-long female dinosaur fossil, excavated in South Dakota in 1992, contains about 170 bones and is said to be the third most complete T. rex skeleton ever unearthed. Bonhams & Butterfields is hoping Samson will fetch more than USD 6 million at the auction. (Photo by Ethan Miller/Getty Images)

Sharks are scary enough as it is – now imagine one more than twice the size of the largest great whites.

U.K. scientists recently determined that the giant megalodon – a prehistoric shark that roamed the seas up to 23 million years ago – could grow as long as 52.5 feet.

The megalodon is the inspiration behind fictional sharks like Jaws and The Meg. Earlier this year a megalodon tooth was found in South Carolina that was the size of a human hand.

Do you have a fear of sharks? If you could bring back one extinct species, what would it be?