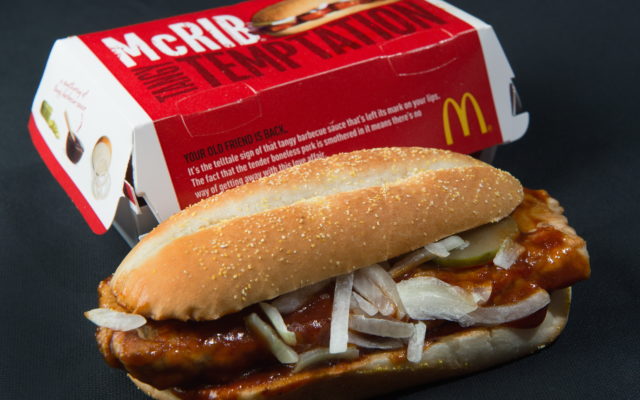 TO GO WITH AFP STORY US-FOOD-SOCIETY-MCDONALD'S A photo of a McDonalds' McRib sandwich, November 2, 2010. Fast food giant McDonald's is bringing back a sandwich -- the McRib -- that gained cult acclaim over the last three decades, in a move lauded by fans known to travel great distances in the hunt for the coveted treat.The boneless pork chop between a bun and slathered with tangy BBQ sauce, topped with onions and pickles, was first launched in 1981, and with rare exceptions has only been offered for sale in select McDonald's for a few weeks at a time. From Tuesday, it will be available nationwide, and for an entire month. AFP Photo/Paul J. Richards (Photo credit should read PAUL J. RICHARDS/AFP via Getty Images)

The popular sandwich will be returning to McDonald’s menus on November 1!

If you’re somehow not familiar with the McRib, it features a boneless pork rib patty, onions, pickles, and a lot of barbecue sauce all stuffed into a bun.

Because this is the McRib we’re talking about, the sandwich will be available for a limited-time at participating McDonald’s locations.

Are you excited to be able to eat the McRib in November? What other limited-time menu items do you look forward to at McDonald’s?