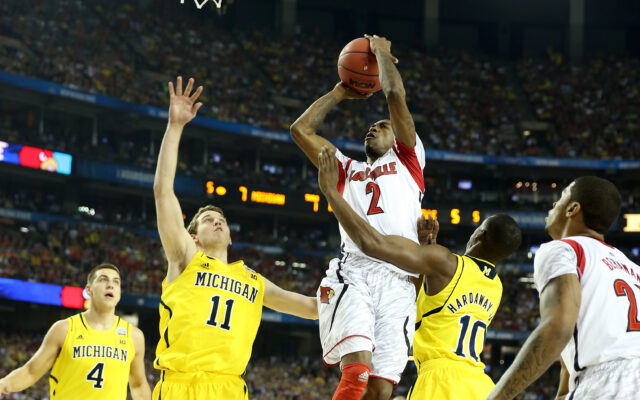 ATLANTA, GA - APRIL 08: Russ Smith #2 of the Louisville Cardinals drives for a shot attempt in the first half against Nik Stauskas #11 and Tim Hardaway Jr. #10 of the Michigan Wolverines during the 2013 NCAA Men's Final Four Championship at the Georgia Dome on April 8, 2013 in Atlanta, Georgia. (Photo by Andy Lyons/Getty Images)

It’s been 10 years, and it looks like the University of Louisville is set to recognize the 2013 Men’s Basketball team.

Officially, U of L is calling the February 18th game against Clemson a, “2013 Team Recognition” when it published a list of game themes earlier this year. The descriptor read: “The Cardinals will honor the iconic 2013 team with various promotions and recognitions.”

The NCAA vacated the national championship title as part of the sanctions handed down in the Katina Powell sex-for-recruits scandal. Part of that penalty is prohibiting the university from recognizing the championship in any official way.

That won’t stop the team, school, and fans from celebrating the accomplishments in honor of the decade anniversary.