Will Smith Gets 10-Year Ban From Oscars 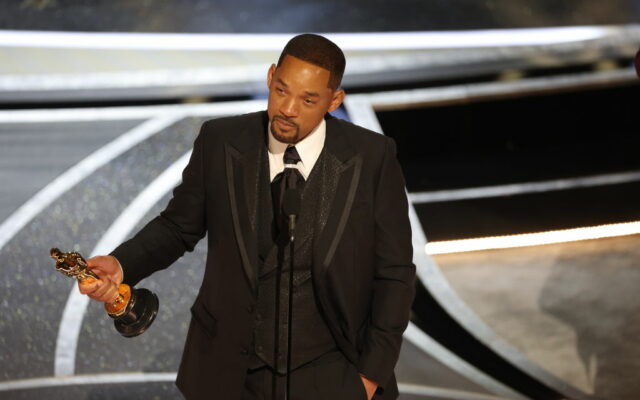 HOLLYWOOD, CA - March 27, 2022. Will Smith accepts the award for Best Actor in a Leading Role for "King Richard" during the show at the 94th Academy Awards at the Dolby Theatre at Ovation Hollywood on Sunday, March 27, 2022. (Myung Chun / Los Angeles Times via Getty Images)

The Academy of Motion Picture Arts and Sciences has finally made its decision regarding ‘The Slap’.

On Friday, the Academy announced that Will Smith would be banned from Academy events – including the Oscars – for ten years.  However, his Best Actor Oscar will not be revoked.

In a letter, Academy officials wrote “The 94th Oscars were meant to be a celebration of the many individuals in our community who did incredible work this past year; however, those moments were overshadowed by the unacceptable and harmful behavior we saw Mr. Smith exhibit on stage”.

The Academy also apologized for not “adequately” addressing the situation in the moment – allowing Smith to remain in the building after the incident.

Smith, who resigned from the Academy last week, said via statement “I accept and respect the Academy’s decision”.

Should Smith’s Oscar have been taken away?  Will ‘The Slap’ discourse go away now that the Academy has announced its ruling?