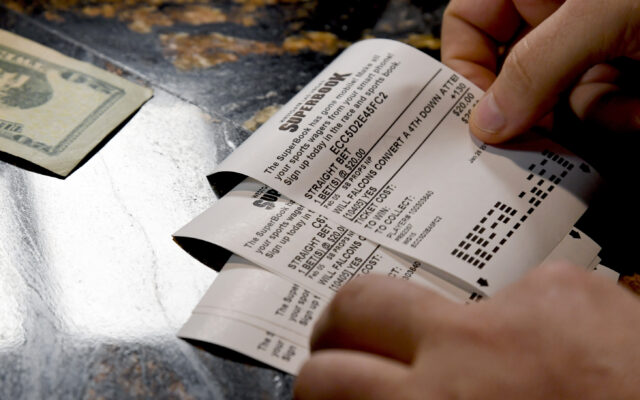 LAS VEGAS, NV - JANUARY 26: A bettor places wagers on some of the more than 400 proposition bets for Super Bowl LI between the Atlanta Falcons and the New England Patriots at the Race & Sports SuperBook at the Westgate Las Vegas Resort & Casino on January 26, 2017 in Las Vegas, Nevada. (Photo by Ethan Miller/Getty Images)

A record 31.5 million Americans plan to bet on Sunday’s Super Bowl, according to estimates released by the American Gaming Association.

That will add up to over $7.6 billion being wagered when the Los Angeles Rams and Cincinnati Bengals take the field.

Officials attribute more betting on the big game because 30 states plus Washington, D.C. now offer legal gambling; That includes Arizona and Connecticut which legalized sports betting just in the past year.

Have you made a wager for the Super Bowl? Is it casually with friends or part of an office pool — or something more “official”? What’s one of the craziest bets you’ve lost?