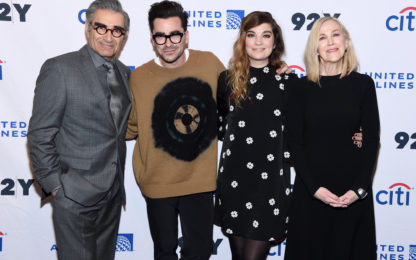 The Primetime Emmy Awards were held virtually for the first time ever. @joefryer takes a look at the memorable moments, including a sweep for @SchittsCreek and a mini #Friends reunion. pic.twitter.com/ntPUWEPjfg

HBO’s Succession also won in many of the drama series categories, including the best drama series award and best actor in a drama for Jeremy Strong.

The final season of Schitt’s Creek won all 7 possible Emmys it was up for total, including a historic sweep of all the major comedy categories.

Last Week Tonight picked up its fifth win in a row for best variety talk series. RuPaul’s Drag Race picked up the award for best competition series. Once again, virtually no broadcast shows won more than one Emmy this year. The only exception is Saturday Night Live, which won six.

And Jennifer Aniston put out a fire.

And there was a mini “Friends” reunion!