US Constitution hits the Auction Block 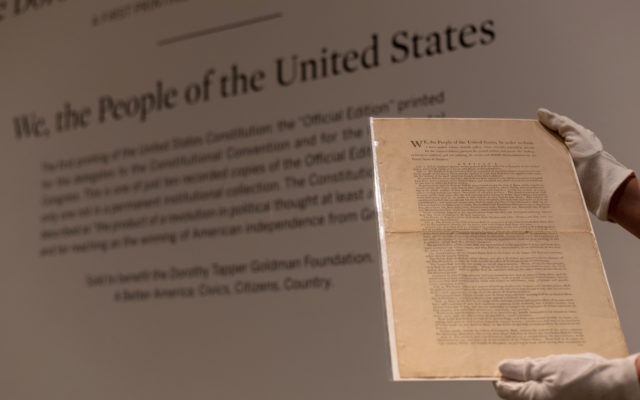 NEW YORK, NEW YORK - SEPTEMBER 17: The First Printing of the Final Text of the United States Constitution is on display during a press preview at Sotheby's on September 17, 2021 in New York City. This one of 11 known copies of the official printing produced for the delegates to Constitutional Convention and for the Continental Congress. This is the only one that has remained in private hands. (Photo by Alexi Rosenfeld/Getty Images)

Sotheby’s Auction House is giving you a chance to buy the U.S. Constitution.

Well, maybe not the Constitution. However, it is an ultra-rare copy — one of the first 11 printed for the delegates to the Constitutional Convention, says Sotheby’s Selby Kiffer. The auction house is expecting to fetch somewhere between $15 million and $20 million for it.

The 234-year-old document is going to be put on display in Los Angeles, Chicago and Dallas before it heads back to New York for the auction, which has been scheduled for November, Kiffer says.

Why are people so intrigued by historic or antique items?