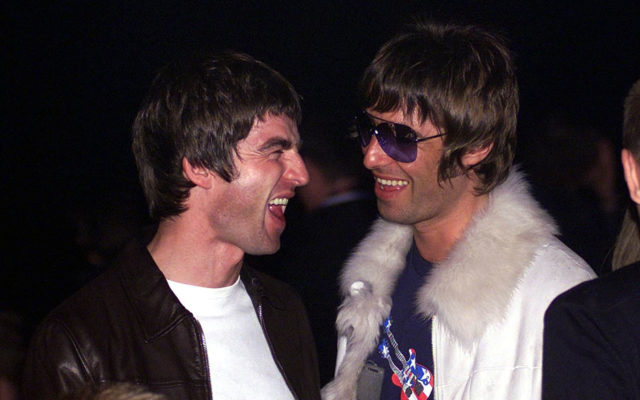 Singer-songwriter Noel Gallagher (left) and his brother Liam (right), from the pop group Oasis, at the NME Carling Awards at The Planit Arches, Shoreditch, in east London. 18/8/01: Fans of Oasis have a chance to see the anniversary show as tickets go on sale. * exactly 10 years after their first ever gig. The band are playing six UK dates later this year - their first of 2001 in Britain - for which they have turned their back on the usual stadiums to perform to just a handful of fans. The tickets were due to go on sale at 10am but fans have been queuing for hours in Glasgow, Manchester and London to make sure they are among the chosen few. A spokeswoman for the band said This is a rare chance to see the band in such small venues. There are only around 4,000 tickets available for each of the cities. Oasis are playing three cities which are close to their hearts and which proved important in their early days.. 6/10/01: Rock superstars Oasis will unveil new material as they begin a series of intimate shows to celebrate ten years as a band. The Gallagher brothers have turned their backs on large stadiums to embrace six shows in smaller venues, the likes of which they have not played for years. The dates are the first in the UK this year and sold out within minutes of going on sale this summer. (Photo by Sean Dempsey - PA Images/PA Images via Getty Images)

Noel Gallagher is giving props to his brother Liam.

The siblings have been fighting very publicly since Oasis split in 2009 but in a new interview, Noel conceded that Liam is more successful than him in their respective solo careers.

Noel explained, “Liam’s doing his thing, he’s responsible for the legacy being what it is, he’s keeping the flame alive and all that and good for him. He’s doing massive gigs, he’s selling more records than I am and he’s selling more tickets than I am, if you can believe that. So he’s doing his thing and I’m doing mine and we’re both pretty happy doing that at the moment.”

Noel is currently working on his fourth solo album.

Do you have a favorite Gallagher brother?

Do you have a sibling you STILL always fight with?