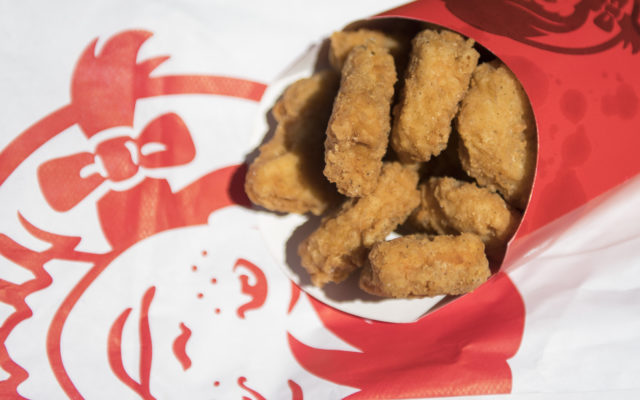 Wendy's fast food chain chicken nuggets are viewed in Bowie, Maryland on May 9, 2017. - An American teenager has broken the world record for the most retweets, in a crusade to win a year's supply of his favorite food: chicken nuggets.Beating out TV stars Ellen Degeneres and Kim Kardashian, and leaving former US president Barack Obama in the slow lane, 16-year-old Carter Wilkerson started his Twitter challenge on April 5 when he asked the Wendy's fast food chain how many retweets he would need to receive a year's supply of nuggets for free.And the web responded. On May 9, 2017, his message had been retweeted more than 3.4 million times, beating the record that Degeneres racked up at the 2014 Oscars, when she posted a selfie with a gaggle of film stars that included Bradley Cooper, Jennifer Lawrence, Meryl Streep and Brad Pitt. (Photo by JIM WATSON / AFP) (Photo credit should read JIM WATSON/AFP via Getty Images)

This isn’t a trick: Wendy’s is giving out TREATS in the month of October!

Every Friday in October, Wendy’s will throw in free food with the order of medium fries through their app.

October also sees a free Frosty with fries deal on the app too!

What do you order from Wendy’s? What is your favorite food combination?